We slept in. At least, I did! Hahaha. (Not so sure about Marilyn.) The phone ringing is what woke me -- it was Angel. I'd asked him about borrowing some of his I Love Lucy books, so he was calling about that.

Angel and his wife Kathy came by just past noon and we visited for more than an hour. Very nice chat!!! And he left behind some books, which was sweet of him. We talked of getting together again soon...

I fixed Marilyn's computer -- her speakers haven't been working recently. I finally pulled it away from the wall (not easy!!!) and checked the plug in. It was loose. So it was an easy fix. (grin) Now she can hear the music and sound effects when she plays Zuma...

And we both played some Zuma today, too! (smile)

We watched some TV. And talked about taking a ride, but decided not to do that. However, we did run to Freddies to pick up a few groceries. We wanted more cottage cheese, for one thing. And got some watermelon and some other items.

Marilyn made her WONDERFUL baked beans today and we both ate a ton of them! Delicious!!! Really a taste of summer (and we always have them around the Fourth).

I also want to share several photos -- so here we go!

These are not in chron order -- because LiveJournal simply does not load things in order. I just don't want to fight it and hate spending ages trying to rearrange them. So it is what it is. Hahaha. 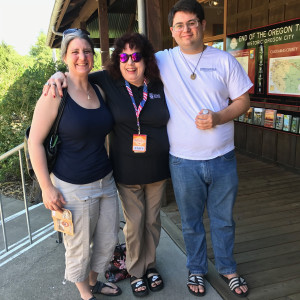 Christine, me and Xander at the
End of the Oregon Trail Interpretive Center 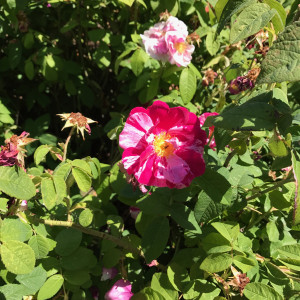 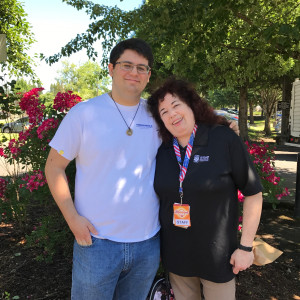 Xander and me near some roses! 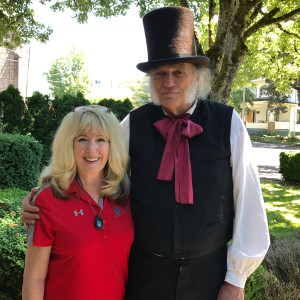 Marilyn with John McLoughlin
outside the Barclay House 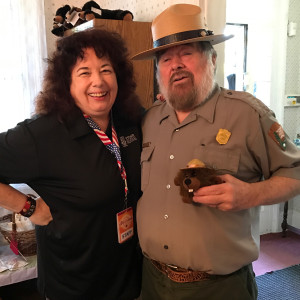 Me with John Salisbury
at the Barclay House
He's holding the bear Marilyn bought me -- and went and
put on his own hat (we've named the bear John!) 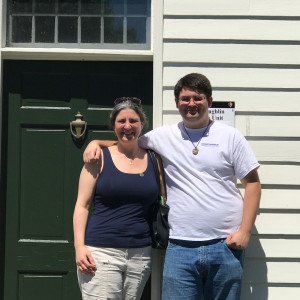 Christine and Xander outside
the McLoughlin House 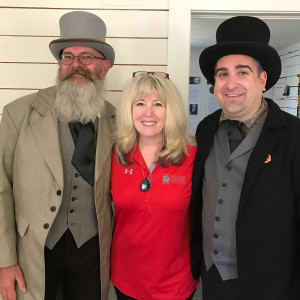 Marilyn with two living history characters
(she is obviously in the center!) 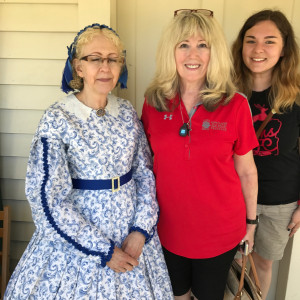 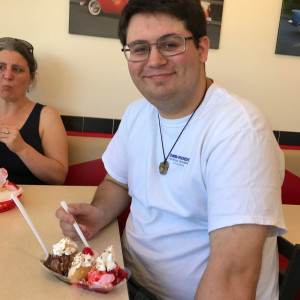 Lunch! I 'forced' Xander to get
a banana split (minus bananas as they
had none!) and 'split' it with me! 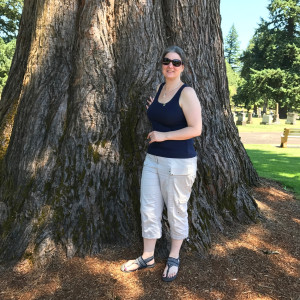 Christine by a tree at the
Mountain View Cemetery 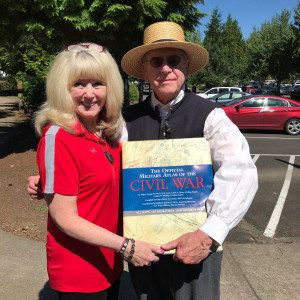 Marilyn and Rolla
holding the book she's had for him
for weeks! 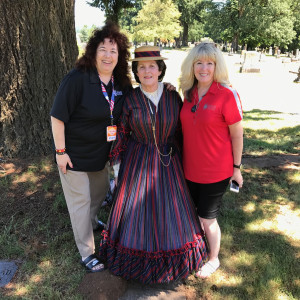 Me, Marge (Rolla's wife) and Marilyn
at the Mountain View Cemetery Xander at the cemetery 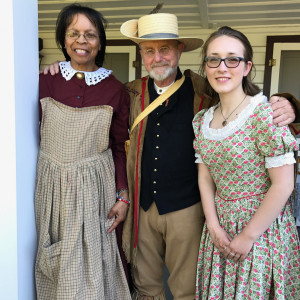 Living history characters
(Denyse is on the left) 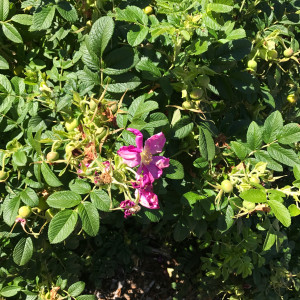 That was such FUN!!! I'm so pleased to finally share some photos from that day!

We enjoyed our usual METV shows tonight. And we loved The Time of Their Lives on Svengoolie tonight -- it's a favorite of ours! We're huge Abbott and Costello fans.

As of late last night, Marilyn and I were unsure whether or not we'd go to the Oregon City Heritage Days event today (she really was having a time dealing with her IBS-D -- and I'd been up for hours during the night doing the garbage and recycling, then dealing with leg cramps). But we just really wanted to go TODAY, especially as we'd set up to do that with Christine and Adeena.

We had to drive in to the office and get gas, so I phoned Christine to let her know. And found out that Xander WAS coming along! It turns out that she invited him, he said no. She told him I was going. He said yes. I just love him so much!!!

Adeena came to our house and we three went to the office. Then on to Oregon City. We were expecting a VERY HOT DAY in the 90's and that's what we got!!!

We made it to all but two of those: Museum of the Oregon Territory and Stevens-Crawford Heritage House.

Marilyn and I have been to the McLouglin House and Barclay House several times in the past. But Christine, Xander and Adeena had never been to any of these places before! We've also been to the cemetery and the William L. Holmes House -- plus the elevator! (The elevator is the only vertical street in the United States, by the way!)

We had fun together and saw a lot of wonderful things.

And we got to say hello to many of our friends from the Oregon City group. Including Rolla at the Interpretive Center (Marilyn got to finally give him his huge book on the Civil Way). He was so excited. And Rocky at the Francis Ermatinger House. He offered a ghost tour for the festival staff sometime, which sounds like fun! And John at the Barclay House. Plus Karin and Marge at the cemetery. Oh, and Denyse at the William L. Holmes House, just before we finally headed for home.

We ate lunch at Mike's (Rocky suggested it). It had a 50's diner vibe -- very cute! And good food. We had burgers and hot dogs -- and Xander and I split a sundae! (smile)

Christine was a very good sport. She hadn't wanted to go to as many places as she ended up doing, but Xander insisted and she went along. She's busy packing to move to her new house...

It was quite HOT and we got a lot of steps going from place to place. But what an experience! It was even better than we'd hoped for! And we were so happy for all of them!

It's actually 3:30 a.m. right now. I just did my meds, which takes forever -- especially when I have to open up new bottles (why is that so hard???). At least that's done for another week!

Tomorrow we head to the beach and the Rockaway Beach Pirate Festival. There are still more events going on...

And I just had another bout of leg cramps. So frustrating.

I need to share PHOTOS (still!). Hopefully soon! I got some good shots today...

This has been a very hard week.

Marilyn is having a flare-up of her IBS-D -- little wonder. Stress alone would account for that.

The thing is, we'd be TIRED anyway after the parade. I don't know if it's even appropriate to call it the 'end' of the festival, with all the events we have going on this weekend (some starting tomorrow). There's often a big let down. And people frequently get sick during the end of June or during July. You can only keep up that pace for so long, I guess.

And now we're not only losing the seasonal staff, but we lost a third of our year round staff. And Marilyn has a ton of work on her plate (as she always does), but tons more.

I can't say this more clearly: I do not want her to face a summer of doing all this work alone. It's not fair to her. She works very hard all year long. But she deserves some rest at some point.

If she's not feeling better in the morning then we'll wait to go to the Oregon City event until Saturday. We do not plan to miss that event entirely! We've been looking forward to it for too long.

Then we'd go down to the beach late Saturday, and go to the Pirate Festival on Sunday... Again, this is a busy weekend facing us -- and Marilyn could use at least a DAY with no expectations.

Poor thing! She went out for drinks after work. But what started out as fun for her turned into just more WORK. She needs a break!

As for me, I did finally get my hair colored after all the crap all day about our internet and email. That's at least something. And it's real garbage night, so I'll get up in the middle of the night and tackle that. (sigh)

We went directly to the store to pick up my insulin (and it turned out other prescriptions were ready, too). Then over to the BottleDrop to take bags from here at the house and from at work. THEN to Walmart to shop -- especially to get cat food, kitty litter AND all many tons of supplements. Lots of $$$. And I'm sure it was EXHAUSTING for Marilyn.

We both admitted we were tired after this week. I wonder when Marilyn will finally get a day to relax?

I'm going to nap now -- then do the garbage and recycling.

I just changed Sheila's password -- today was her last day. Thankfully I can do that Remotely...

We were watching "The Fall" before Marilyn went to sleep. It's creepy (about a serial killer). Suddenly I heard noises upstairs! And both cats were in the family room with us. Plus Henry looked up at the noise, too! I had to come upstairs and check all around. (sigh)

This was a good day! First, it was lovely to be able to SLEEP IN for a change!!! It takes some time for us to catch up our rest, but we're headed in the right direction now.

Marilyn and I went out to Starbucks and got their Sous Vide Egg Bites (specifically the Egg White & Red Pepper, which we like best), and drinks. And we took a ride down to Sauvie Island, which we just haven't had the time to do in ages!

We also took cans and bottles to the BottleDrop -- bags from work and from home. (You can only take two full bags at any one time. But we can take two from each, meaning four altogether.) We've got another full two bags here at home -- and many at work to take.

And we forced ourselves to go in and get our pedicures and manicures, today. It's great to get that chore out of the way! And it lasts for weeks. We last had it done on May 14, so it lasted us a little over five weeks. Pretty darn good! I got Red Stone and Marilyn got French Pink. Very pretty!

Marilyn needed some more hangers, so we decided to try HomeGoods (and maybe IKEA, if we didn't find them at HomeGoods). They had exactly the kind we wanted at HomeGoods. I got black (which is what I already have in my closet here in Portland). And Marilyn got pink. She has a variety of colors in her Portland closet. (We have white wood hangers at the beach house.)

We got tacos and guacamole take-out for dinner. I've got one heck of a stomach ache tonight, so I guess I ate too much. (sigh) It didn't really feel like it, though! (I only ate one of my two tacos.)

My blood sugar was only 72 when I got up this morning! And later in the day right before we ate dinner it was only 90 (and I had a glass of wine while getting our nails done). And that's without taking any Glipizide during the day! (I only take it at night now.) Not sure what to make of that!

Marilyn and I plan to go to the Oregon City Heritage Days event on Friday.

Yes. There are STILL Sanctioned Events of the festival taking place!!! (smile)

It's really HOT in the house upstairs! It's over 80' up here. Thankfully it's cooler downstairs! It was a very sunny day with blue skies. It didn't start out that way, but it burned off pretty quickly. I guess we're finally getting some nice weather now that spring is nearly over.

I wish this stomach pain would quit! (ugh)