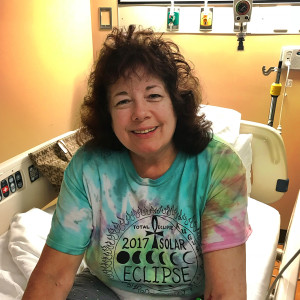 Well, at least THIS time there's a good reason I haven't blogged. I'm currently in the hospital (Legacy Emanuel for those who know Portland). Marilyn brought me here on Sunday last, and quite literally saved my life.

Remember my post about terrible pain? Well, it had nothing to do with my hips this time! I was so sick by Saturday night that there was no way I could go to the party that night at Candee and Roger's. So Marilyn and Adeena went while I stayed home. Marilyn brought me a sandwich I remember picking at. I was so bad I had no desire to either eat or drink. I hadn't really eaten for several days.

Sunday morning: Marilyn let me sleep in until around 11:00, then she got me up to do my blood sugar and insulin. I was SO CONFUSED that I was unable to do it. She got me dressed -- and when she did she discovered SHINGLES all over my torso!

We went to emergency where the real fun began. I was totally wacked. I made no sense at all. I didn't know anything. It was damn scary.

But here's the IMPORTANT thing: Marilyn had googled 'shingles and confusion' and got a hit on encephalitis. The arrogant doctor wanted to ignore her, but she just kept bringing it up. They did a brain scan. They could have quit there. But finally they did a spinal tap (I never even winced).

And they admitted me based on the confusion.

It takes ages to get results on the tests. But they began giving me the antiviral routine Marilyn had insisted on. You use it both for encephalitis and shingles, actually. And eventually I got water (I was soooo thirsty!) and food. And pain meds, thank God.

So, yeah, I have shingles, which is common, supposedly. Maybe so, but everybody and their cousin wants to see it, so I guess it's rare around here!

But I also have encephalitis -- also known as inflamation of the brain. This is directly related to my shingles.

But the thing is, you need treatment IMMEDIATELY. Thank God Marilyn took me directly to the hospital. And it's a killing condition. I'm doing pretty well because it was caught quickly (thanks to Marilyn!!!).

Right now I'm tired and in considerable pain from the shingles, where I was punched and headaches (common for encephalitis). I still have a little bit of confusion, but I'm getting back to normal.

Marilyn and I are trying to pretty much play it down a bit. We don't need panic at our office as to when Marilyn and I will be back. And as to what we'll be able to do.

I need to continue my antiviral infusions every eight hours for the next ten days. They inserted a PICC (peripherally inserted central catheter) in my left arm for this purpose. I ended up here another day because they crossed signals about the actual bags of medicine.

And I'm a dose behind because my recent dose hadn't been finished, so Max my nurse did the unfinished one.

Both Marilyn and I are fighting to stay in good spirits. I feel awful for her. She's barely slept in days and is under horrible stress, aside from worrying about me. (She's actually cried a couple of times, and she never cries.)

Finally, we have tickets tomorrow night for RAIN - A TRIBUTE TO THE BEATLES that we've had for months! I really don't want to miss it! I mean, not gonna! I'll infuse there if I have to!

So much for a pretty serious update. Hope I'm not a downer. Actually, this is a MIRACLE. It could have gone very differently! Thank you, Marilyn for saving my life. We're lucky every single thing went as it did.

And get this: steroids are part of the treatment for brain swelling! And I had those on Friday when we thought this was about my hips!

If you're getting up there -- or under a lot of stress -- you should consider getting the shingles shot. Just saying! Actually, I heard about numerous people in their 30's who have had shingles. So...

Sister Sue went into Emanuel hospital this afternoon. I spoke to both Larry (her son) and Candy (her daughter). And to Sue, several times.

She's full of liquid, which must come off. Sue has been diagnosed with (terminal) Pulmonary Hypertension, and a-fib (they go hand in hand). She's been given several doses of nitroglycerin, which helps both the heart and the lungs.

Prayers (and/or good thoughts) are requested for her (and her family), please. Much appreciated!

I'm also VERY concerned for our friend (and neighbor) June. I think it's possible she, too, should be in the hospital right now!

Again, your prayers (and/or good thoughts) are requested. Much appreciated!

I spent some time on the phone today, trying to work out my prescriptions. (sigh) Part of the stuff isn't covered. The new medicine shouldn't be taken at night for a few days according to the pharmacist (great). I just went to take my nightly meds, and they gave me THE WRONG DOSAGE of my Metformin, which Leslie wanted to change! I'm still on 850, rather than 500.

And LaToya (her assistant) has a call in to insurance to find out what they WILL cover in place of the two medicines they refuse to cover...

Well, time for bed. We've got a big (and LATE) day tomorrow!