Yes, Marilyn, sister Sue and I went to the midnight movie to see "Twilight: Breaking Dawn - Part 2" last night. That is to say, we would have gone at MIDNIGHT -- but they actually had a 10:00 p.m. showing, so we went to that, instead. What a great deal! We were coming out of the movie just a little past midnight, so we didn't have to stay up half the night for a change.

But Marilyn made a point as we were heading home from dropping off Sue, Nicole and (Nicole's BF) Ulises -- it might be that you don't get the same die hard crowd earlier on, the way you normally do with the midnight crowd. There wasn't a bunch of cheering or anything like that -- and most of the crowd didn't even stay to see the end where they showed every cast member from all four of the films (prior to the usual cast list). What gives with that?

By the way, we met up with friends, so we were a group of eight: Rosanna, Rosanna's daughter-in-law, Carol (from work), Marilyn, sister Sue, Nicole, Ulises and me. The two teens sat together in the back, and the rest of us had a good chunk of one row! 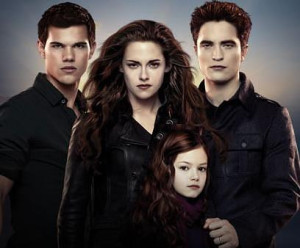 Anyway, I won't spoil anything for anyone -- but if you've been hearing about a 'twist' at the end of the film, I'll just say BE PREPARED for something different. That's all I'm going to say! And try to avoid hearing about the movie from anyone until you get to see it for yourself...

Recently I've been re-reading some of "Breaking Dawn" and the other books in the series. Just to be clear, I find them as poorly written and difficult to read as I always did. She's a good story teller -- with a fascinating story and interesting characters. But she's not a good writer. So there are times I literally have to force myself to keep reading.

Not that it matters, mind you! I mean, the woman made money hand-over-fist without any need to improve her writing. It shows that anyone with a really good story has the potential to be successful, in spite of a lack of technical writing skills. She has talent, admittedly. And I'm sure she doesn't care in the least what I think -- why would she? (smile)

Some of the best writing I've ever read in my life is fanfic, by the way. I was just reading one of Marilyn's "3:10 to Yuma" stories -- and the quality of the work is stellar. The research is pristine and the characters are exactly right and the tale was interesting. Talent in writing is one thing, but skill is something entirely different. I like a good combination of both, please and thank you!

Well, I'm supposed to be working on something right now, so I should go. We might go see our friend Shari tomorrow (???) -- and if we do I need to have all this stuff we have for her all ready to give to her. I'm gathering it, at least. But some of it needs to be gift wrapped, and I haven't even started on that. (sigh)

I did wrap up some gifts and take them to our neighbor Cheryl (across the street). Her birthday is tomorrow, and I felt she could use some cheering up. Or, as I said to her, I thought she 'needed a little birthday' today! (grin)

I did get a bunch of laundry done today -- and some festival website work. And sister Sue and I went to lunch together. I tried to get June and Jim (our neighbors) to go, too, but June was down in bed. I don't know if she isn't feeling well, or was just worn out. She got very tired from the work she did last week and the first of this week in connection with their recent church bazaar, so it could have been that. But I emailed her and phoned their twice. I talked to Jim both times (she was sleeping). It's going on 5:00 p.m. and I still haven't heard a word from her... I hope she's okay!