I got my hair cut today -- good thing, as I really needed it! (I've been talking about getting it done since BEFORE going to Denver, to give you some idea...)

Here was the amusing thing: I was going to ride my bike to the appointment.

That's no big deal -- I've done it tons of times over the past several years. But I haven't had my bike out to ride in some time, I have to admit. I need to be at the appointment at 1:30. It's not that far, so even going slowly I should be able to make it in around 15 minutes, tops.

Happily, I decided to get ready and take my bike out before 1:00. It turns out I've got a broken spoke in my rear wheel. That really sucks, as it's the wheel I replaced at one point (getting a more heavy-duty wheel when I did so). I didn't notice it at first. When I first got on my bike all I noticed was that my tires were really low. I was ready to walk it to the nearest Garage for air, but when I saw the spoke that was it. I took it back to our garage, instead. Not sure how I'll get it to the bike shop in St. Johns, but that's where it's going to need to go next!

Meanwhile, I've still got my hair appointment! So I just leave my bike and start off walking...

I phoned Marilyn on the way there -- and she offered to pick me up after and bring me home (very nice of her, considering how busy she is!).

I made it there in plenty of time. It's not impossible to walk, but I normally wouldn't walk that far (I'd always bike, instead). I'm sure the exercise did me some good, anyway. Heaven knows my body has to be starved for exercise! No time like NOW to get going on giving it some!

Anyway, I got my hair cut (and Dee shampooed me, which is always nice). Here's how it looks right this second (I just took a shot with my iPad...). 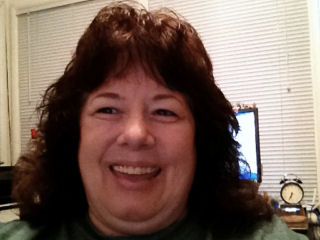 (The quality of iPad photos just isn't all that great, by the way. But oh well...)

Marilyn's coming home soon -- we need to go get our clothes (!!!) for the Auction on Friday! (yikes) Nothing like waiting until the last second! (smile)