I started out my day put up the News item on the festival website (you can view it HERE if you like) -- not only on the news page, but also on the Home page. When I code news, it's always a matter of three pages.

Good thing I got to it early, as I discovered several errors in the Press Release that I was using to write it up -- and these were corrected before going out to all the media sources. That's part of what I do, too!

Next I started working on the eNewsletter for RHSAA. Our big Homecoming weekend is next week, starting with the Alumni Dinner on Thursday, October 4. I wanted to actually code an eNewsletter, the way I do for the festival. Marilyn and I work hand-in-glove on all the RHSAA stuff -- just like we do for the festival stuff. (She's in charge of Communications for both, understandably! She's an expert, after all...)

By the way, did I mention that the festival eNewsletter took another AWARD this year? Out of the four years I've done it, it's won four awards. It got another Bronze this year, so now it's hard Gold, Silver and two Bronze. Not bad, huh? (smile) I feel like I know a thing or two about coding eNewsletters, that's for sure...

I did a very simple two-column design for RHSAA. Then I had to figure out HOW to use the code at Constant Contact (the email service we use). They are much more difficult than CoolerEmail (which is what the festival has been using forever). I had to actually phone for support and have the woman walk me through the steps. But at least that didn't take more than 20 to 30 minutes!

Coding it up took a bit longer. And then I wanted to embed it into the RHSAA blog, which we use at our website jointly for Blog/News. I thought it would be cool to see the coded version there. But I suspected it would be hard to make it thin enough to fit in the space, which turned out to be true. The width of the area isn't big enough for much. So I settled for a simple version for the Blog/News (done in WordPress) -- and the fancy version for the actual emailed eNewsletter.

I did get them both out today, which was the goal!

Lunch was something new, by the way. Today for the first time I tried Glory Seasoned Southern Style Great Northern Beans. (I bought the can at Walmart a few weeks back.) The website can be viewed HERE, if you're interested. 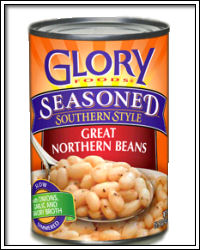 If you get a chance to try them, I highly recommend them. These tasted so much like my mother's homemade beans! I could hardly believe it! I'm never personally going to spend the time my mother did on making a pot of beans. Besides, Marilyn never liked her white beans. So being able to open a can like this was just perfect! Exactly enough for me to have alone. And very yummy, to boot...

I didn't eat much for lunch, knowing I had my dentist appointment at 2:00 today. Instead of the planned root canal, Mary worked on a different tooth. She asked me what was bothering me most, and it was another tooth in the upper right of my mouth. It didn't go that easy, so it could end up needing a root canal, too. (sigh) But I have my fingers crossed it will be okay. To be safe, Mary gave me prescriptions to take if it becomes infected. I hope it doesn't!

Finished my beans in the afternoon and was sooooo hungry by then! And I got right back to work on the RHSAA stuff, plus work for the festival website. We're in the middle of Intern fairs right now, so the Intern page at the website needed immediate updating!

I was so tired tonight that I was drifting off while Marilyn and I watched TV. "Remington Steele" was another fave episode, but I slept during much of it. We were up in the middle of the night last night (like 3:00 - 4:00 or so), and I think I'm just sleepy... I'd probably be napping right now, except I wanted to blog. I tried to get to it today, but I was just too busy.

I'm supposed to be putting out an eNewsletter for the festival tomorrow morning (!!!), but all I've done is the banner I already shared here. I still need to pull together the actual CONTENT! (sigh) I think it might have to go out on Friday, instead...

Friday is a work day in the office, for me. I have Kris coming in so we can tackle the Auction software update -- which is more complicated than it sounds. We have to update the Server and several individual computers, too... I also have some other IT stuff to tackle, including installation of software on the new laptop.

I don't know if I ever mentioned that my (damn) iPhone CRASHED more than once while I was in Denver! It started with the Photo feature not working -- I was unable to Forward any images! The Forwarding button/icon FROZE UP -- it just turned white and wouldn't work at all. Next thing I knew, the iPhone was entirely frozen! Then I got it to at least allow me to make and receive calls (thankfully!) -- but it was very messed up. Anyway, it was screwing up again today (sigh) -- and the Photos function hasn't worked since Denver...

I tried hooking it up to iTunes to see if that would fix it -- but no go. Then I did research and tried several different things. It ended up being very much like the fix for a frozen (messed up) iPod -- no surprise there, I guess! Now it seems to be back to normal, thank God. It was a real pain not to be able to use the Photo feature while on our trip, I have to tell you. But doesn't it just figure? Apple is a huge pain and buggy as can be. It's like waiting to see what will freeze up next: iPod, iPad or iPhone? Hahahahahaha.

Stopping now, as this entry is huge. I have more to share, believe it or not, but it can wait until later! I'm wound up right now. Weird considering I was half-asleep when I came into the office to type this. You just never know...

I'm behind reading here, but too busy to try currently. Hopefully soon!