I'm feeling more than a little sad as I sit here typing this...

Today was the Memorial service for Mitch, Marilyn's and my best friend (and a close friend to sister Sue, as well). Obviously I've mentioned him a lot recently, so people already know about his passing -- and that we've been preparing for this day.

NOTE: You can CLICK THIS IMAGE below to see the larger photo: 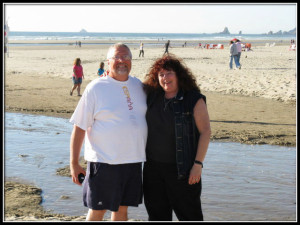 This picture was taken during our annual 'Birthday Trip' for Mitch back in 2010. How Mitch LOVED going to the beach! He could just stand and stare at the ocean for ages... I'm glad that we got to take so many beach trips with him over the years.

The turn-out for his Memorial was AMAZING -- there were tons of people in attendance. In fact, the place was pretty full. His niece, Gena, and her four-year-old son Bubba flew in from Alaska for this. And Gena's half sister, Marie, and her new husband were also there (Marie was always treated like a part of the family, even though she wasn't a blood relation). Along with his older brother, Taylor, and assorted other relatives including an aunt and uncle and a number of cousins. (Taylor did NOT bother introducing us to most of these people, for whatever reason. We know Gena and Marie -- and keep in touch with them on Facebook. And I did get to meet the aunt and uncle briefly.)

Sister Sue, friend June (who knew Mitch's mother, Audrey, from church), Marilyn and I rode out together to the church (in Lake Oswego). We did manage to get the photo boards ready this morning (finishing up after last night and our previous work) -- plus we had four frames with photos and we took along a large arrangement of roses. We were working on it until 11:30 last night, and back at it this morning...

It was an interesting service. They had selected four people from the choir to speak, and aside from the minister, they were the ONLY speakers. All of them knew him ONLY from church, so they had no idea about the other side of Mitch. They knew he was an amazing organist (he WAS) and about his dedication to his work (32 years as their organist is proof of that). But they thought he was 'shy' -- and I'd call him reserved, rather than shy. Plus very private. They didn't know he was an incredible conversationalist -- a brilliant man who could converse on any number of topics and had opinions on loads of subjects. As they spoke about him, I sat there shaking my head, thinking that they really didn't KNOW HIM at all -- and that many would go away believing this reflection of him.

I was angry that we weren't allowed to speak about our friend, considering we knew him better than anyone else in the world. We did get a chance to talk about him during the reception, but that's not really the same thing...

I'm trying to let go of my anger, because this should be about Mitch. He did love his job, love that church and the choir, even if he wasn't that close to them in many ways. I'm grateful we got to know him so well over the years, because that's what really matters.

And I know he's in a wonderful place, playing a much grander organ than any he played here on earth...

We'll see him again one day. It just hurts right now missing our dear friend so much.

The people of the church were very, very kind and warm -- and we talked to a great many of them.

Afterwards, Marilyn took Sue, June and me out for Mexican food, which was very nice!

It's great to be home. We're happy to be sleeping in our own house and loving our dear cats (who missed us a lot). Even though we'll always miss Mitch, life is still good and it goes on. And we need to enjoy things that would have been special to Mitch, in his honor.

Remember to tell people that you love them -- and to hug them often. Take a lot of photos, because you'll be glad to have every single one, believe me! And with the ease of digital photos, there's really no excuse NOT to take them all the time!

That's it for today.