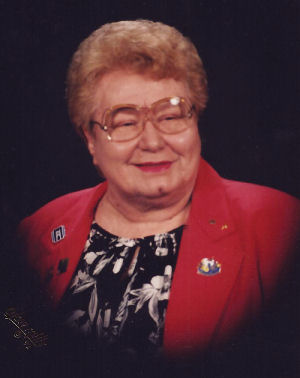 I can't believe I had such a hard time finding a photo I wanted to share of Mom! I need to get in and SCAN a bunch of photos so I'll have more (and better) photos to share in the future.

Mom loved that red jacket so much! She wore it a lot for 'dressy' occasions. (smile)

This was a WORK DAY for Marilyn and me. We went in this morning and worked for around 7 1/2 hours (or more).

We did take a break to walk up to McDonald's around 11:30 to get a bite to eat. Thankfully! When we got home from work by way of shopping at Safeway around 7:00 p.m., I had a low blood sugar incident. Not horrible, I was around 88. But I haven't had one in some time now, and I'd forgotten just how HORRIBLE it feels. Wow, does it suck!

We really got a lot DONE today, I think.

It was cool to be able to spend some time actually HELPING MARILYN, like I used to in the old days! There was a time when I was an assistant to her -- AND PROUD OF IT, believe me! I still love to work directly for her, helping her on projects.

She let me do the Coronation script today. I did a first draft (which she'll still need to tweak), and it actually made sense. She needed mini-bios of each of the Princesses for 2016, and I already HAD THESE -- as I'd written up one per girl back during announcements (for Facebook). So it saved the time of needing to writing those up brand new.

Marilyn had planned to have Adeena help with this, but it honestly made more sense for me to do it (as I explained). Hopefully Adeena hadn't started yet -- or at least hadn't gotten far if she did...

I also helped her just a tiny bit with the Formation Map for Grand Floral Parade. Though, honestly, she did most of that work herself! Marilyn is a good one for just jumping in and DOING what she needs done! Hahaha.

And she and I worked on stuffing one of the sets of instructions that needed to go out for the parade. Marilyn told me it had been ages since she'd done a stuffing project. But heaven knows she and I have done it many, many times in the past decades of working at the festival. Hahaha.

Colin is the only one 'up' with me right now, as it's past 1:00 a.m. He's lying in Marilyn's chair in our home office, curled up and napping. He doesn't usually lie in these chairs (Henry has his own chair in the office, as he does it all the time). Usually Colin prefers a certain stool, or the pillow we keep on the desk for him. I guess he's not very up, considering he's asleep!

It took me some time to find just the right photo of Mom (Gloria) to post here in my blog, as today is her birthday. It was hard for her after we started working for the festival, because Marilyn and I were almost ALWAYS tied up on her birthday and couldn't spend that day celebrating with her! She didn't really understand WHY ever, to be totally honest. But because of that, she'd get many birthdays each year to make it up to her. (grin)

I also did a bunch of festival website work today. I have more to do, but I feel REALLY GOOD about working on the GFP page, for one thing.

Very Good News: I needed to phone Bill, the wonderful man who provides his RV every year to be used as our Command Post for the Grand Floral Parade. At first I didn't reach him, and I was worried. Marilyn and I are a little afraid that he might die and nobody would let us know! I left him a message and he called me back and I missed the call! Then I finally connected with him. It was just a delight to hear his voice. He told me he's heading toward 83 (meaning he's currently 82). Things aren't good with his wife, Lucy, who has both Parkinson's and Dementia. He's been taking care of her for four years and is finally ready to look for a place to house her, he's so worn out (poor man). Anyway, the conversation was wonderful! This is his 20th year with us in this role! He asked about getting a jacket this year -- and Marilyn is going to arrange that. And when we were hanging up he told me he loved me. Marilyn and I love him, too! (It wouldn't be the same without him!)

Speaking of jackets, I called Christine and got her permission to get MY jacket as we were leaving. Everybody else on staff got them last week. It's black this year!

Katie and Carol also came in the office in the afternoon. Carol has been really sick and is having a hard time because of her busy schedule. She said she had a nap before she finally came in (good thing). Katie and Marilyn chatted about various projects that need doing (Katie is Marilyn's assistant). I love both of these women so much. They are a joy to know!

Yeah, we did have to go shopping after work. We were out of POPCORN (!!!) and cooking oil (can't make popcorn without it) -- and there's no way we can go without popcorn right now. Hahaha. Plus we need paper products (Kleenex, toilet paper and paper towels). And we bought sundry other things...

Well, it's late and I need to head to bed. I should go in to work tomorrow, actually, so I could be there for Communications (which I always miss). Not sure if I will right now, though.

I did speak to Donn today and set him up to come in Tuesday to do the Profile for the new person who is starting on Wednesday. She's replacing John from previous years, yet this role is being done totally differently, so that's not really a guideline as to her work. Anyway, we're putting her on the computer that was Katie's last year -- near Angel's computer. But right now I don't know her name -- so I'll need more details tomorrow. (smile)

Henry still seems pretty chipper -- and he's keeping the 'bad' eye open more and more. So we continue to keep our fingers crossed!

Sending the promised prayers out to Carol and invite anyone who prays to do the same, please. She an amazing person who is very dedicated to the festival and really essential to what's done there. She works so hard and such long hours. I love her and her family (husband Brian and daughter Aisha). I'm hopeful she'll feel better soon, and Brian will continue to have better health, too. Aisha has always been a remarkable girl and continues to be well-rounded and involved in so many things. (She was camping this weekend.)

I had a nice chat with sister Sue when she phoned this evening. I miss her so much!!! I'm really glad she's going to be able to go to the parade this year.

We're loving the new car so much! And I'm also crazy about our new phones! How lucky are we??????