The highlight of my day was having lunch with my sister Sue and our dear friend Sue!

I phoned Sue (my sister) about going to lunch and discovered that our friend Sue from The Dalles was visiting her! So I suggested we three go out, and that's exactly what we did.

Photo Share!
[clicking this image will take you to a larger version] 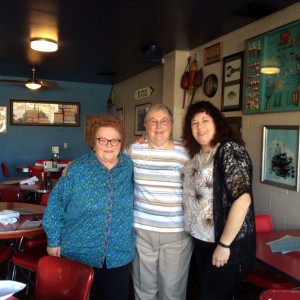 Sister Sue, friend Sue and me at The Fishwife

It's literally been YEARS since I last saw our friend, Sue. She's not only a friend, but she's the wife of Bob who was my boss for several years back in the 90's (and has also been a lifelong friend).

We had such a lovely visit!

Marilyn and I gave Sue one of the vintage collector's plates (with a rose painted on it). And Marilyn let me pick up the check for lunch (which meant she paid for our lunch). She later told me she also picked up the check for her own lunch out with Vern. (She's so generous.)

It's terrible when we don't manage to stay in touch with our friends!

Anyway, the rest of the day was IT stuff and complicated. I ended up with a miserable headache for much of the time. I still have traces of that headache tonight. (sigh) When you combine both a headache and computer woes, Charlie ends up an unhappy girl...

It was quite a true Autumn day. So Marilyn and I ended up making a pot of chili (comfort food) and having that for dinner...

I wrote to Blake today. I hope I hear back from him soon. I don't know if he can do the work we need or not. But I certainly hope so.

And I wrote again to Tim with RHSAA. I originally sent him a detailed letter with numerous attachments back on October 1 -- two weeks ago. But I haven't heard a word from him, so I resent everything again today.

I logged in to the RHSAA domain and could clearly see he hadn't touched it! Very, very annoying. Plus the organization owes Marilyn money -- so it would be nice if they'd eventually pay her. Honestly! I'm writing to Mike next time and asking him what (if anything) he plans to do about this!

Well, I'm tired, so that's it for today.