Yeah, I've been BAD about blogging. Just too busy -- and when we're finally home, too tired. We're focusing a lot more on getting the proper food and PROPER REST this year, so I spend time making sure we're eating well. And we're both sleeping a lot more than we normally might during this time of year.

So something has to give, and this year it's been my blogging. I feel bad when that happens, because that's how I track my life. But I'm doing the best I can...

We were up VERY EARLY this morning, as today was the Rock 'n' Roll Portland Half Marathon (and we needed to be downtown by as close to 6:30 a.m. as possible. We needed to park in a parking structure, as our building was blocked by the race and we couldn't park there. So we were 'hiking in' (so to speak) with whatever we took along (which in my case was a backpack with my laptop, plus other items -- and my purse that holds my iPads, Kindle and external hard drive, so it's damn heavy).

I have a few photos to share, anyway! PHOTO SHARE!
[CLICKING THESE WILL GIVE YOU THE FULL SIZE IMAGES] 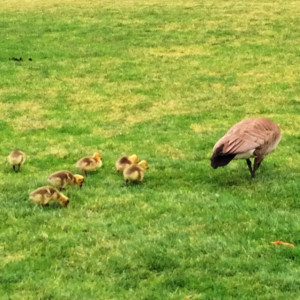 The geese had their babies near the office, so Marilyn and I went out to see them right after we got to the office! 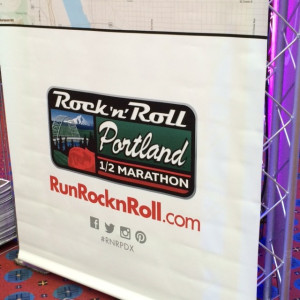 On Friday we went over to the Convention Center to the Expo event (also held Saturday), where people picked up packets for the race. There was a lot to see and do. We were with Jillian and Jessica. Jillian wasn't running, but had registered. She gave her bib to Jessica so she could run! 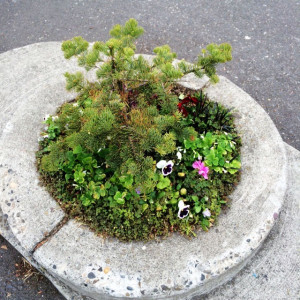 Our office isn't far from the world's smallest park: Mill Ends Park. Anyway, I walked past it today and shot a photo. 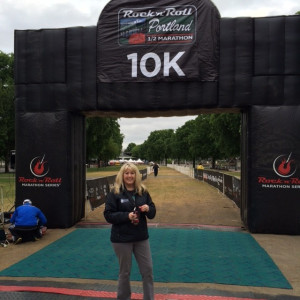 Marilyn, Jeff and I went out to walk around the area and see the setup for the Race. Here's Marilyn at the finish line for the 10K. Note the PDX carpet that's there! 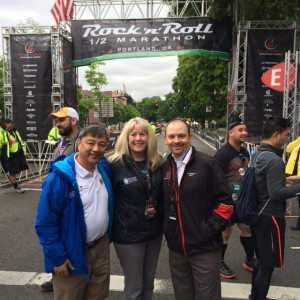 We ran into our President, Frank, and I got this shot of the Half Marathon finish line with Frank, Marilyn and Jeff! 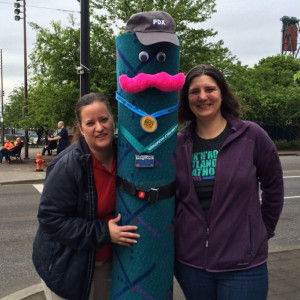 We decided to take PeeDee (the Grand Marshal of the Starlight Parade) outside to cheer on runners! He's so popular!!! It was amazing to see people actually STOP RUNNING to get a photo with him! And you could hear people saying "Grand Marshal" and "Awesome" and other things -- and they were just grinning and smiling at him. He might be our most popular Grand Marshal ever. Anyway, he's certainly the easiest to work with! Hahaha. He does whatever we want him to do! That's Carol and Christine on either side of him. Carol hauled him out to OMT band rehearsal last week, too! I'm pleased to be the one who gave him his eyes. And I also added his mustache! Hahaha. 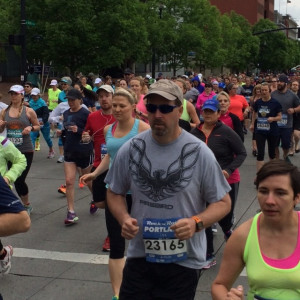 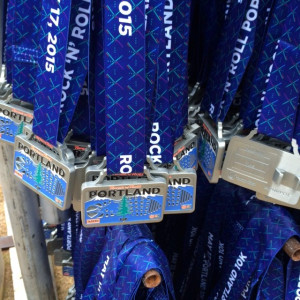 Medals for the finishers. Note above that PeeDee was wearing HIS medal! 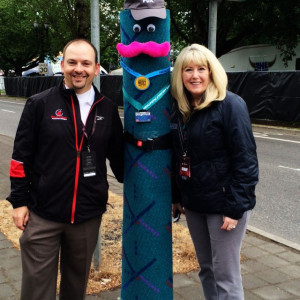 We brought PeeDee back out to see the runners as they finished the race (near the finish line). That's Jeff on one side and Marilyn on the other.

We were at the office today until around 1:00-1:30. That's more than six hours if you're keeping track. It might not sound like long, but it's after a very busy week with a lot of long days.

We were so tired yesterday that we didn't end up going to the band concert downtown (or to the office to work). But we got some work done today, even though it was pretty intense there, with all the in and out activity from our group of runners and so on.

I got some important website things finished up (finally!!!). And Marilyn and I worked on our email, which is always crazy this time of year.

We'd considered going to get our nails done, but are putting it off until next weekend. We were exhausted when we finally made it home. What the hell, they need doing, but whatever.

I'm continuing to have a lot of low blood sugar incidents. And today I had a weird spike (high -- over 200). I just felt a little off today, frankly. I came home and slept. Got up and had a headache and was stuffed up, so Marilyn had me take blue (cold meds) and go back to bed. I might be fighting a cold -- what freaking LOUSY TIMING!!! I simply can't be sick right now!

Friday is OPENING DAY. Obviously, though, we've already been having a bunch of events. It's crazy busy every minute now.

We've had to let our STEPS go a lot, because there's not much we can do about it, really. We're stuck at our computers much of the day. And too tired when we get home to face the treadmill, no matter how much we want to. Anyway, soon we'll be walking a ton with CityFair set up. We 'took the park' last week (Donn started the IT setup on Thursday and will finish up Monday). The stage is up and many of the tents, even though there's more to come. Rock 'n' Roll used it today, by the way.

This is very random, I know. Oh well.

Fitbit Update: Marilyn did 7,500 steps today and I did 7,800. Not bad, really! I have days and days to report, but I just don't have the numbers in front of me right now.

Adeena set up her Fitbit (that we gave her for her birthday) and is going great guns! She's already done a 15,000 step day!