I stayed home this morning, as planned. More about that later. Anyway, when it was time for Marilyn to come and get me, she had Angel with her. So instead of taking the usual route to work, we went down Interstate. Angel wanted us to see a billboard, which we assumed was of the Clown Prince (him). We go one direction, and don't find it, so we turn around and head the other way. When we finally find it, it turns out it's a billboard of MARILYN!!!

So now I need to do a photo share! [Clicking on these will take you to the full size image.] 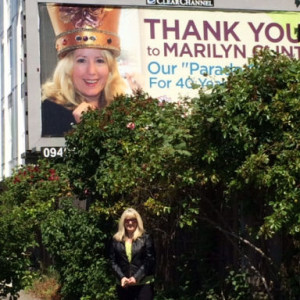 Marilyn in front of her billboard 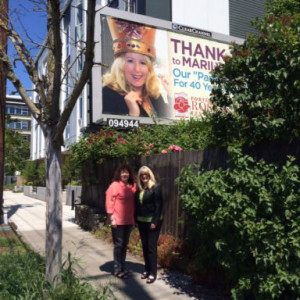 Me and Marilyn in front of the billboard

Isn't that awesome? No, it's not a great location -- and it's hard to see the full thing unless you're in just the right spot. We were all three snapping shots and avoiding cars! Hahaha. But the people involved wanted this to be out in our hood (we live in North Portland, and that's where this is).

Marilyn's joke was that if you're headed from town on Interstate to the Dancin' Bare (in Kenton), you could look right out and see it! (heh) This is a part of Interstate we NEVER drive, and even if we would happen to drive there, we'd never head that direction! So it was a good thing Angel took us out to see it...

We both immediately posted photos to our Facebooks, as we were stunned by this. But Marilyn so very much deserves this honor! I love it to bits!

Boring: I stayed home and worked on music for the PowerPoint for the Board Meeting. (More hours involved, like the video stuff yesterday.) And I got my hair colored. Still having pain, but oh well.

Our dear friend Adeena was at the office, hanging out to wait for her performance tonight as Rosie the Riveter at the Board Meeting. (So she and I talked for ages while doing other things.)

Unexpected: I got a bunch of steps again today, walking to get lunch, and going to Starbucks with the girls on Staff and walking to the Board Meeting and having to rush back to the office with Josie for speakers that we didn't end up using. And later doing the recycling (it's garbage night).

Exciting: The Board Meeting turned out great. The PowerPoint was a huge hit, and I was proud to be part of that. Christine did a WONDERFUL job with it -- and the video and music did make it rock. Adeena (Rosie the Riveter), Candee (Queen Thelma) and David (Mayor Harry Lane) all did a fabulous job doing their Living History routine for the Board and Court. The Court did a good job doing their introduction routine (they introduce themselves and talk about major festival events).

The venue (a new location) was a nice one and worked out fine. Frank (our president) did a good job speaking, and Jeff (our CEO) also did a good job with his presentation.

Cool: The Clown Prince scepter was delivered today, in time for Angel to show it off tonight at the Board Meeting! Marilyn took along her scepter (that she got at her 40th Anniversary Party), too.

Interesting: We got home and were pretty tired. Plus hungry. So Marilyn had fixed her dinner and I was upstairs doing something. And she called up to ask if we wanted to go have a drink with Jeff. I said 'yes' and went back and got dressed (I was in my nightclothes already!). Then we went to Hooters to meet him. We had a couple of drinks and some frickles (and other snacks), while talking over the completed Board Meeting, plus some of the stuff going on in the office. There's a lot of the usual seasonal 'drama' that happens when the Staff is under so much stress and is so swamped with work. So we chatted about things and just got caught up on things.

Hard: I could barely get myself to get the recycling outside, because I'm TIRED. And still dealing with my constant leg discomfort. But I managed... Then I needed to come and BLOG. (smile) But as hard as that is, I always feel pleased when I get it done.

More photos! [Clicking on these will take you to the full size image.] 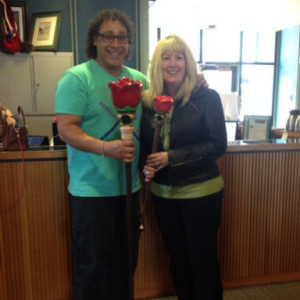 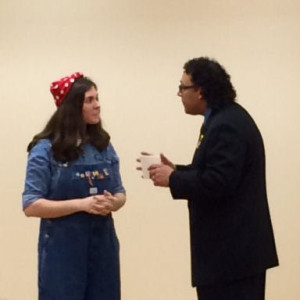 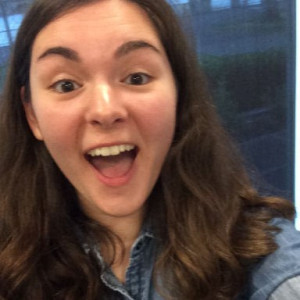 Fitbit Update: Marilyn did 6,000 steps today. Amazingly enough, I did 10,035 steps. You've probably noticed that I haven't even tracked Fitbit for a few days. Basically, we've been too busy to focus on it lately. But no worries, we haven't given up on getting our steps!

And that was pretty much Thursday!