I'm exhausted, so this will be quite short.

Tonight was Marilyn's 40th Anniversary Party. There was an enormous crowd of people there and it was WONDERFUL to see everyone who attended!

I'm so very proud of Marilyn, and feel she's totally deserving of this honor. She's really earned it with her dedication and passion for the festival -- and for all her hard work for the past four decades.

[clicking on the images will bring up the full size] 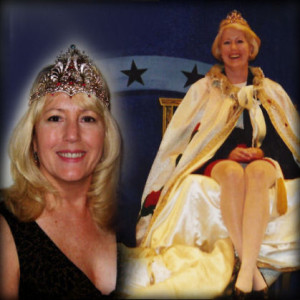 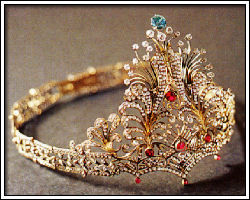 The second photo is of the Queen's crown, which you see her wearing in the combined photos above.

I said: She's always been a QUEEN to me! Happy to celebrate her 40th Anniversary.

What I didn't know: They presented her with a custom-made scepter during the party!

She also received a trip for two (both of us) to New York for the U.S. Open tennis tournament (it's for three days and includes a lot of special things). And the wonderful Staff pitched in and gave her a bag of money. I just counted it, and it contained $1,000 dollars! Good grief! They called it her 'Vegas Fund' -- and wanted her to use it for a Las Vegas trip. (Mind you, we have a pretty small staff!) Let me not forget to mention the necklace she was presented: A gold tennis racket, with a diamond. And sister Sue gave her $100. (With additional cash from Candy and Nicole and Larry and Madyson.)

But there were PILES of gifts and cards! She's a bit overwhelmed by it all, to be honest. I think it's all far more than she expected. She knew the festival would give her a big gift, but the rest of it seems to have amazed her. Well, and me, as well! People were just remarkably generous. She also got a picture book that people attending signed.

There was food and a huge cake (and cupcakes). Marilyn and I didn't eat there, because we were busy every second greeting people and chatting with them. Angel was our driver (he wore a black suit with black tie and a hat!), and he picked us up at the house and took us for drinks before we headed there. Then stayed with us and drove us to the After-Party, and finally home. Our friend Adeena was there to take photos, and never left Marilyn's side the entire evening! She helped Angel carry things into the house when we got here, before her long drive home to Battle Ground, Washington, where she lives.

I'm forgetting details, and just can't get into it tonight. I'm far too tired. I just finished up the garbage and recycling and want to head to bed...

I did have two drinks before the party, but never had another drink after that. At one point I was drinking iced tea and I drank three glasses one on top of the other. I was so thirsty! Marilyn and I did have food at the After-Party, though (we hadn't really eaten all day). Marilyn barely drank, either, which I think would be a surprise to most people...

Tomorrow we'll have to open all the presents, making a careful list for thank you notes. But she has a facial in the morning -- and I have some important festival work to do...

Tomorrow night Marilyn and I are going to dinner with our friends Arthur and his husband William. We're looking forward to it!

Adeena would love to get together to watch a movie (we recently bought two OnDemand). That would be fun!

Marilyn did speak, and did a WONDERFUL job (as always). I'm so damn proud of her!

We were thrilled by everyone who attended!!! It was so good of all of those people to come to honor her! (And we were a little sorry by some people we had expected to be there who didn't show up.) Mom and Dad were there for her 20th -- I think they were there in spirit for this one.

I should share photos. But I took very few! I'll try and get some from Adeena and share in the future...

Fitbit Update: Marilyn got 5,928 steps. I got 5,775 steps. Not bad, considering we didn't have time to really do much walking around! She got part of her steps walking to her meeting this morning. I'm really not sure HOW I got all of mine! But obviously we did more walking at the party than I thought. (We were on our feet for hours.)