I had to use this icon, considering we were doing Rosie the Riveter stuff this evening! (grin) Cool icon, huh?

Today I continued working on photos of Marilyn. I needed to rotate several and rename a bunch. Some I touched up and some I resized or cropped. But I have quite a few more to do, still. I'll continue to do this project tomorrow. Yeah, we'd planned to finish it over the weekend, but the best laid plans...

I did a little research project this morning. Someone wrote the festival via info@ asking about the collector pennies we had one year. Christine contacted the usual people about festival history -- and Marilyn suggested Christine ask me. I had the information, plus photos. And I have the four-coin set, and after a short hunt, I found them. It was three pennies, plus a dime. Each had a different design. Plus I know the name of the company that provided the machine. I was pretty proud I could quickly come up with the answers. Christine said in the future she was going to add me to those she asks. I don't begin to think I'm the festival historian that Marilyn is, but I do have some pieces tucked away, here and there...

At one point today I was on the phone with Josie from the office. I was typing as we talked, and she was talking about how FAST I type. That's ironic, as I used to be pretty slow. I didn't learn to type in school. I took it in summer school one year (I WANTED to go to summer school, believe it or not, so it was my own idea), but the class wasn't all that helpful. Later I took a stupid course via mail, using a manual typewriter. If you've never used one, these are really tough to work with! Pressing down the keys firmly enough was a bear! I was pretty excited when I got my first electric typewriter, I can tell you! The keyboard on a computer is so easy to use that it's little wonder I can type this fast now. But I think my claim to fame isn't how fast I can touch-type, but how quickly I can use a stylus to type on an iPad! I'm pretty damn fast, frankly...

Donn contacted me around noon about my sister Sue's computer. She was having trouble getting on the internet -- never a good thing!!! But Donn surprised me. The first question he should have adked her was 'Did you call Comcast to see if there was an outage?' He said they used Comcast and never had outages, but that hasn't been my experience with either friend June or Sue. This part of town does deal with outages now and then. Then he should have discussed her recycling the modem. Anyway, I know he later did discuss these things with her. The first time we talked it was around half an hour. I spoke with him several times.

I did speak briefly with Sue. She wasn't feeling at all good today. And she had to go to the hospital for a blood draw. She offered to take me shopping, but I wasn't ready at that point to go out, so I declined. But she said she could take me tomorrow, so hopefully we'll get to go. Plus maybe we can get coffee and talk. She and I are both trying to come up with gift ideas for Marilyn. Her 40th Anniversary party is on April 2, and her 60th birthday is on April 7. Gosh, I wish I knew what to get! Maybe we two can brainstorm together... It would be nice to find some perfect present.

I did some laundry today, working on towels and washcloths. I also cleaned out the laundry room sinks.

Marilyn sent me the IT Budget items for 2015, so Donn and I were going around about that for ages today. Trying to reason out all the complicated details. Marilyn has submitted it to Jeff, so hopefully he'll okay it quickly. We need new equipment in place soon, and it takes six hours per machine to get the work done once the equipment is in place.

We have two new people starting in April, so we need to be right on this!

Marilyn came home around 6:20, to pick me up for our trip to Battle Ground. It took around 35 minutes in traffic and rain. We arrived with five minutes to spare! (Due at 7:00.) We were going to the Battle Ground float warehouse to get pictures of our friend Adeena as Rosie the Riveter. They allowed her to use a bunch of equipment dressed in her costume so we could take photos to use for various purposes. They turned out great!

Adeena as Rosie the Riveter 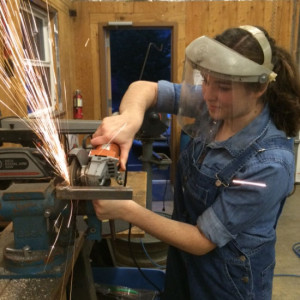 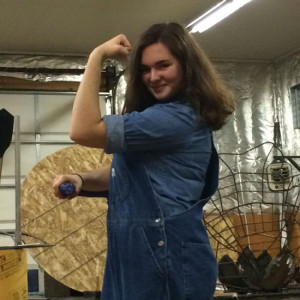 But, wow, was it COLD there! Around 40'. We were glad to get home to our warm house! We finally got here around 8:30. We picked up chicken on the way home. Good thing, as we were both starved...

I actually posted to Facebook today, sharing the penny photos. I am trying to be better about Facebook. Boy, it's not easy when you're busy... But I have good intentions.

Marilyn and I watched "Philomena" (again) tonight on cable. It's really a wonderful movie.

Good news! Marilyn's new running shoes came today! She wore them on the treadmill to finish her steps. Amazingly enough, I got my steps today without the treadmill.

Well, I must get the photos as close to DONE tomorrow as possible. I also need to work on the Official Charity page for the festival website. And I have some other thing I need to do, too. I don't recall what right now, which sounds crazy, but there's just so much to do. I have notes on the computer, so no worries. Hahah!