I was originally planning to go to work this morning. But Marilyn had to be in very early (GFP Creative Team Meeting), and I was having one of my crazy stiff neck things that often lead to vertigo, so I stayed home. (Later in the day it was also my back bothering me. I don't know why, but oh well.)

Yes, I wanted to either be at the Airport for the Grand Marshal announcement, or be in the office supporting Marilyn. But what the hell...

We were all very excited for the announcement, which made the noon news, by the way. 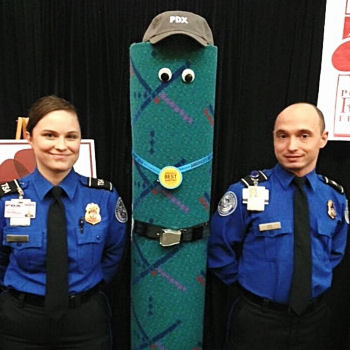 By the way, Marilyn came up with this idea of having the PDX Carpet be the Grand Marshal of the Starlight Parade. She's amazingly creative! But all in all PeeDee has been a team effort. I'm pleased that my contribution was to add his googly eyes (smile). Those eyes got a lot of attention today.

People either loved the idea, or hated it. But I think those who hated it just don't GET the Starlight Parade, which has always been about FUN -- and that's been more and more true over the years. The idea was to commemorate the workers at the Portland International Airport, plus have some fun with the fact that the carpet is so popular, now that they're taking it out and laying new carpet. Marilyn's excited to connect with the woman who created the design -- and is pleased to highlight her. And everybody is just enjoying this delightful beginning to the part of the festival that's light-hearted and enjoys a good laugh. Even if we're laughing at ourselves!

Actually, it was pretty funny to read the negative comments. And difficult to take them seriously!

So a local radio guy who is a big festival supporter and a friend of Marilyn's and mine contacted me via Facebook in the afternoon, seeking a list of past Grand Marshals. Marilyn created one of these for the Grand Floral Parade (GFP), but never got around to doing it for the Starlight Parade. So I jumped right in and started one. Originally I had 1998 through 2014, as I've been involved with the scripts for the parade during that time. But then I did research and started gathering more names. Finally Marilyn jumped in and helped me, and we now have them all! (The parade started in 1976.)

Some past GMs who have been less serious choices would include Donald Duck (in 1985). There was no GM in 1988, but Spuds MacKenzie (the Bud Light Beer dog) was a special guest that year! One year a person dressed as a nutcracker filled in for James Canfield (from the Oregon Ballet Theater) who didn't show up. Tonya Harding was supposed to be GM in 1991, but bailed at almost the last minute, leaving Marilyn to decide we wouldn't pick anyone else last minute. (Shades of her trouble to come, huh? We were already non-fans before all that happened!) The entire Portland Police Force was GM in 1998 (several police represented everyone else -- and pins were taken to roll calls all over town so each person got one). We've had a local screenwriter made good, a local musician made good, Rex Oregonus (he originally ruled over the festival from 1908 until 1913 as festival king wearing a disguise, with his identity revealed at an annual ball) and Darcelle (a famous local female impersonator). Plus Bruce and Esther Huffman of viral video fame and former Mayor Bud Clark, known for going on the Tonight Show and giving his familiar cry, "Whoop! Whoop!" (He was also a former tavern owner who appeared in a then-shocking photo "Expose Yourself to Art" -- in which he appeared to be flashing a full-sized bronze statue of a woman. He's a colorful character, without a doubt!)

Let's just say that we Portlanders do pride ourselves on being a bit different. And in keeping Portland weird!

It's strange to hear some handful of sour people saying they're going to ban the parade because of this choice. But somehow I doubt those people would attend the Starlight Parade to begin with! Hahaha.

Today was busy. I talked to sister Sue several times. And even spoke briefly to Shari (to tell her about the news showing on TV) and Jim (same reason). And I talked to people at the office, too.

Rich and I spoke several times.

I did the final Princess announcement at the website today. And I was working on some other website-related things, as well, including the NEWS item about PeeDee.

Donn was at the office working on Robin's computer (used to be Stephanie's). Wow. Was it messed up! Aside from the stupid partition, he discovered that the machine had been renamed! That might not be a big deal for a stand alone computer, but for a computer on a Server it's a HUGE deal! We were both going round and round about it for quite some time today.

I can't believe ANYONE would have the nerve to rename one of the festival computers! But what I know for sure is, the three people who would have the RIGHT to do that (Donn, Kris and me), would NEVER EVER do it! We all know it would screw up the connection with the Server!

I'm delighted with Donn that he finally reasoned out the solution. We'd both suggested several things, but he tried one that was all his own idea. Thankfully it worked, because otherwise we were going to need to reformat the machine back to scratch! As it is, we're talking a couple hundred dollars to fix all these problems. But it could have cost far more...

It does bring up how we need to be even more strict about what users can and cannot do to and with these computers! I didn't plan to be really strict in the new Computer Policy document, but yesterday and today have really changed my mind!

Anyway, I'm glad both Donn and I are so stubborn -- and so willing to put in the research and time to fix things.

Marilyn got home VERY, VERY LATE tonight (around 9:00). We had fish sticks and green beans with cottage cheese for dinner.

She's doing the treadmill to get her steps. I felt so lousy today that I just gave up on getting mine...

We've got Frank's rose planting first thing tomorrow! It's an uniform event and out-of-doors (at least part of the time). And it's supposed to RAIN. We've been to many of these over the years in rain, by the way... Can't wait to see how Frank's house turned out!

(Don't think we're doing any of the other rose plantings, but you never know...)