Today was the memorial ceremony for Dick Powers, who was a friend of Marilyn's and mine for the past 40 years. He was my buddy. Marilyn and I never failed to brighten when we saw him at some Rose Festival event!

He took two very important photos for me, both of which are hanging here in my office at home. One is of me with Mayor Vera Katz (Dick saw the opportunity to get the shot and actually encouraged both of us to pose for it!), and the other was when I was knighted by the Royal Rosarians back in 2001 (he wasn't assigned to that event, but attended especially to see me knighted and get the shot!).

There was a WONDERFUL turn out of people to honor Dick today. And Marilyn spoke officially on behalf of the festival and did an OUTSTANDING job (she's such a great public speaker). 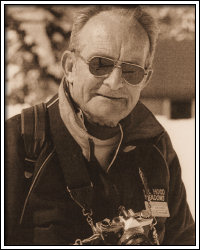 Rich was there and sat by me. I was in the middle, with Marilyn on the aisle.

They had wine and coffee and lemonade, with a full spread of 'snack' foods (fancy, like artichoke hearts and nice mixed olives and meats and cheese and so on), plus an amazing array of sweets (cookies and cakes and on and on). Really lovely.

We got a good walk there and back from the parking structure. It was held in the Peter W. Stott Center at Portland State University (where both Marilyn and I went to college, by the way). We always love walking around any college campus...

The weather was kind to us today! There was no rain during the event.

Dick was incredible! He graduated from Benson High School and joined the army in 1940. During World War II he was involved in the Aleutian Islands campaign in Alaska (!!!) and later was in Italy. (He won the Bronze Star for meritorious service while in Italy.)

He married Jean (who we got to talk to twice) and had four daughters (all were there -- and one of them, Sam, held my hand during Marilyn's speech).

Dick went back into the army in 1949 and also served in the Korean War, receiving the Meritorious Service Award for outstanding service.

In 1957 Dick was assigned to Alaska as a Senior Enlisted Instructor. He got the Army Commendation Medal in 1963. He retired in '64 with the rank of Lt. Colonel!!!

Eventually he became a professional photographer for Photo Art Studios, before starting his own business: Powers Photos n' Video. He worked for the festival for around 50 years (!!!), and also took photos for Portland State's athletic department and Mt. Hood Meadows -- among many others.

Some of his Mt. Hood Meadows photographs have been so popular that people would steal them right off the walls! (They had to come up with a special was to fasten them down!)

He worked into his late 80's -- an inspiration to all of us!

The festival has named a brand new float award after him (Marilyn pushed that through, of course).

He will be greatly missed by many, many people! But as Marilyn pointed out, he's immortal through his wonderful photos.