Started the day at the office finishing up counting pennies for the Queen Thelma search.

We got to break away and go down to the Park (CityFair) to see the visit of the autistic children -- and Brett Bigham, the Oregon Teacher of the Year was there visiting with all the parents. So moving, I have to tell you! A special quiet time in the Park, so those children feel comfortable. Very cool!

And Brett will be riding in the GFP, with his husband Mike (they just got married after Oregon made it legal). He's just a wonderful guy, by the way!

We had a reenactment with Living History characters with the penny count in our office, that was very cool. The count got done and Marilyn and I hung around until around 2:00, then we headed home.

Marilyn got sick in the middle of the night last night and was up for hours in the bathroom, poor thing! So we went home long enough for her to rest for a couple of hours before coming back downtown to the office again... She really needed that rest.

It was exciting to be here with the three Queen Thelma finalists, as they got ready for the parade. They were wearing the most amazing dresses! Here's a photo! Click to see the larger version... 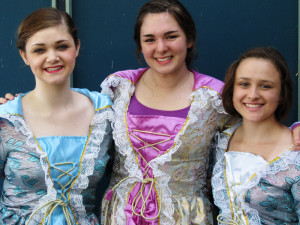 They are Marisa, Adeena and Shelby (from left to right). Shelby won the contest and will be riding as Queen Thelma in the Grand Floral Parade next Saturday.

I love all the girls -- they're just wonderful!

Marilyn and I did take a break after everyone had left to go to Starlight to go over to CityFair and get a bite to eat. We had Yakosoba noodles and waited 20 minutes to get pronto pups (corn dogs) from another vendor -- along with a brick of curly fries. We hadn't really eaten all day, so we were pretty hungry by then...

(Speaking of, I just drank an entire can of soda and a full bottle of water straight down. So thirsty! And we'd already drank more before that...)

Anyway, I set up my laptop on Marilyn's desk (it's large for meetings), so while she was working on her computer, I could work here! So that's where I am now, typing up my blog.

That way I could work and still watch the parade on Marilyn's TV (she has a flat screen here in her office -- which she needs for media purposes as the Director of Communications).

I'm going to forget things. It's been a crazy day!

The Thelma girls and Karen (who manages them) came back part way through the parade, so we spent ages with them, again.

And Marilyn's been signing more appeal letters (another 500+) -- those are all done and ready to be mailed out.

And I have the list of the Starlight award winners, which I need to type up for a News item at the website. It should probably go tonight, but hard to say if that will happen. It might go first thing in the morning, instead.

Hopefully we'll be heading home soon. But I imagine we'll hang out here to help people unpack when they return from the parade...

It's been a long and busy day! We hope to SLEEP IN tomorrow, which would be awesome!