Well, I've needed to get it done FOREVER (many, many MONTHS, anyway) -- and today it finally happened! Sister Sue helped me take my beloved bike in to the local bike shop to be fixed.

This is actually my birthday present from both Marilyn and Sue, by the way. I knew it would be spendy to get it done, though it wasn't as much as I'd expected. (The full cost came to under $140.) I had to buy a new wheel and new brake pads (front and back) -- and have a tune-up. Plus one of the tires had gone bad -- so Dan had to replace it and the tube. So I think the cost was really reasonable.

We took the bike there in Sue's trunk. I hadn't thought we'd be able to do that, but it worked okay. We couldn't seem to keep the trunk tied down (!!!), so we just drove slowly with it bouncing up and down. But it's not all that far from the house to the bike shop, thankfully, so that was fine.

I was super-surprised when he said he could get it done today! In the past they've always had to keep it for several days (even more than a week sometimes) to get around to working on it. But he was caught up with work, so he was able to have it for me really fast. We dropped it off on the way to my hair appointment (around 12:30 p.m.), and I had it home before 7:00.

Yeah, Sue was kind enough to come over again and give me a ride to go get it. Then I rode it home! He inflated the tires to 65 pounds, so it was like riding on air! (I know, I tend to over-inflate my tires. But I just love the feel. And Dan said it was totally okay to go that weight, so now I feel better about it. I used to catch hell from various places I took it for air -- but apparently they were wrong!)

[clicking on any photo will take you to the larger version] 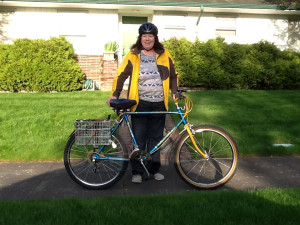 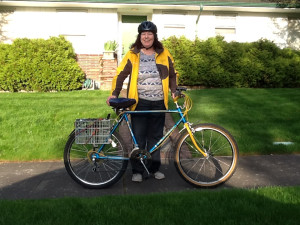 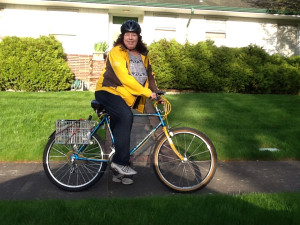 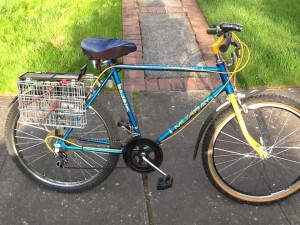 Yes, it's an old war horse of a bike -- certainly not pretty or slick or anything like that. The seat is really beat up and the paint is coming off and it's ugly as sin. But I LOVE that bike to pieces! I've had it for decades. I got it while Dad was still alive (he died in 1998). We got two bikes exactly alike -- his and mine. You'll notice that it's a guy's bike, which is what I've always ridden, by the way.

Those 'saddle bags' (or folding baskets, if you prefer) are heavy metal -- and can each hold a full size grocery bag. I've carried a TON of groceries on this bike over the years -- and piled extra on top. Little wonder I had to get a reinforced wheel on the back years and years ago, because when you had my weight and the additional grocery weight, the poor thing was popping spokes like mad! (Okay, I'm exaggerating a little, but you get the idea. I'm not a feather-weight by any means, so this bike has to be TOUGH!)

I'm sitting here in a total sweat and just grinning my head off -- I love biking so much!

No, I don't really go all over town with this bike. But I do bike all around our local area. I used to take my bike to the dentist and for haircuts and (as I said) to grocery shop. And I've ridden it for both exercise and fun, too. I should be able to do all those things again, now that my bike is in good shape.

Well, it's OLD. But what the heck. I'm not going to ever say that I'm old (!!!), but clearly I'm not young. But you know what??? Biking is one of those things that makes me feel very young! I get on and go and it feels like flying. There's just nothing quite like it...

Okay, I'll stop now -- I'm sure I sound slightly crazy going on and on like this. (smile) And I'll write another entry later to talk about the rest of my day. Right now I'm just going to enjoy the glow from biking. (grin)