It's late (as usual) and I've had a LONG day -- so I'm going to try and make this a quick entry. (Yeah, right. Hahahahahaha.)

Marilyn didn't get home until nearly 9:30 p.m. tonight. She's putting in some very long days now. Again, it's tough being at the office that many hours with our 'no bathroom' situation...

Sister Sue took me to Freddies today, so I was able to pick up some things I needed. And I got Marilyn a surprise (knowing she would be late tonight).

I should be posting a bunch of photos -- considering I have them somewhere! But I'm not patient enough to locate them all and upload and so on. So...

Anyway, I got Marilyn some Gouda cheese (she loves to snack on it) -- plus some tomatoes and zucchini. The Gouda from Fred Meyer isn't as good as the Safeway Gouda -- but at least I had it for her. Then I fried up a couple of pans of the veggies for her late dinner. Surprise! (smile)

This morning we went to one of the grade schools where our Living History characters were appearing. What fun!!! All three of them -- plus Angel -- did a great job! And the kids (and teachers) LOVED them! How could you not, though? They're so entertaining! I got a slew of photos, but mostly on my iPad (which makes it a bit harder to get them here). Anyway, I'll try and share some at a latter date.

Eleanor (our seasonal receptionist) also came out this morning to see them, which was cool. She's so enthusiastic about everything!

The rest of the day?

I spent a lot of time re-working the eNewsletter banner -- which I like much better, now. I also prepared the photos to appear in it -- and took the Copy I got from Marilyn and Megan and coded it all up. Then I wrote my own part and coded it. I tweaked it until it was balanced and uploaded everything. It's pretty close to ready to go -- so tomorrow I can tweak things again (after I get feedback from the usual suspects at the office). Then it goes out on Thursday.

Marilyn also sent me Copy for the World Environment Day page, so I worked on it. It's pretty close to ready to go (it needs to be done before the eNewsletter goes out, as it's linked there).

I spoke to Rich about Mark (there are some issues right now).

I actually took the cats outside in the yard for some fresh air (it was a sunny day). But when I caught Henry just as he was heading under the deck, we went right back in the house. (sigh)

I did get some photos of the yard, though -- very pretty! Again, I need to share at some point (hopefully soon). But I was just too busy for this today...

I got word from my friends Rob and Jeff that Ken is coming for the festival!!! He's going to stay with them, so all I need to do is arrange for the three of them to have Chalet passes for the Grand Floral Parade (which I will, of course). How exciting! Here's a photo of Jeff and Rob that they sent me. (I was teasing them and insisted they send a photo -- and I love what they sent!

[clicking the photo will go to a larger version] 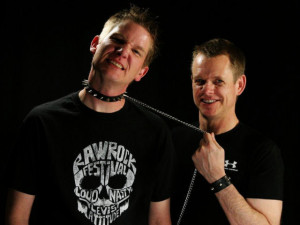 They also sent me two poems (great, great fun -- I was laughing like mad) and a lot of cheery thoughts. Such good guys!

Ken is with Marching.Com, which is how I know him. (He covers our bands.) And that's how I met Rob and Jeff, who are close friends of his. I love all three of these wonderful guys! I was hoping Ken could come visit again this year, as he wasn't able to be here last year...

On the sad news side, our friend Dick passed away. He was very ill, and ready to go -- so I suppose it's a blessing that he didn't have to suffer long. (I mentioned finding out about Dick HERE -- which was a week and a half ago...)

I think I'm forgetting stuff. Our days are so busy and long now, that there's a lot to cover each day! (yikes)

Anyway, I have an appointment to get my hair cut tomorrow (woo hoo). And that's it for this busy Tuesday...