The really good news? Marilyn and I got to sleep in today. (grin)

Anyway, today was Clown Corps graduation day for the 2013 Clown Corps. What a talented group Angel has this year! They always do performances for us before being presented with their diplomas, and it was very entertaining.

I have a few photos here of them to share...

[clicking the photos will take you to the larger versions] 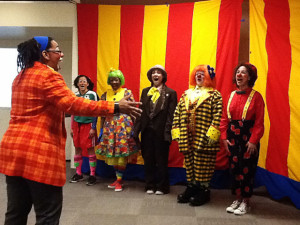 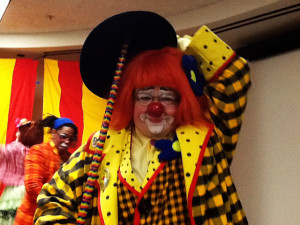 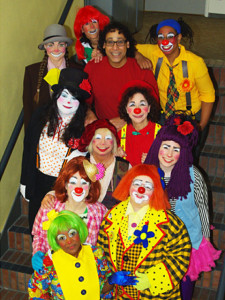 I took more, but don't have them here on my laptop (where I'm posting this). That last photo is of the full 2013 group (with Angel).

After this event, Marilyn and I went shopping at Walmart (we haven't been there in some time). Then we came home and had dinner (pulled beef, string beans and cottage cheese, with celery).

I just watched the 1999 Roman Polanski movie "The Ninth Gate" -- with Johnny Depp, Lena Olin and Frank Langella. Basically, I think it has interesting moments, but SUCKS overall. Seriously. I do NOT recommend you waste time watching it. Yeah, I saw it before years ago, but couldn't recall the end (probably because the end especially sucks... hahahahahaha...).

I was supposed to go in for a meeting tomorrow at the office, but the no-bathrooms situation doesn't much make me want to be there. (sigh) Anyway, I talked to Rich about the meeting and it's not what I thought it was -- so he really doesn't need me there.

I'm really curious as to how long it's going to take for the City to fix this problem. I wonder if they really understand how difficult it is for our Staff not to have running water and working bathrooms? It would be bad any time, but in April when we're in there working every day of the week and until really late -- it's quite an issue. (sigh)

Well, if they don't resolve it, I'll have to live with the porta potties, because I have to be in there, obviously. We all do. What choice do we have? But I don't think I have to say how awful this is. The porta potties are in back of our building, outside (obviously). We're not supposed to use the back door where they're located, so I guess we need to go to the front desk for the key, then go all the way around the outside of our building to get there. And, again, there's no running water -- so we can't wash our hands after we go. (ugh)

Well, hopefully they'll put a rush job on this and get it resolved soon. Keep your fingers crossed for us, will you?

Edited to Add: I just had to come in and FIX the order of the photos again. You know, Scrapbook used to work -- but now it sucks! I can't believe how difficult it is to post photos using it... I wish they would just put it back the way it was a couple years ago!!! (sigh)