Blessing of the Festival AND "Voices From Roosevelt"

Today was a busy day for a Saturday. Generally Marilyn and I like to SLEEP as much as we possibly can on the weekend -- after being so exhausted by our preceding week...

But Marilyn had media training and Court orientation this morning (early) -- and I got up to be sure I had clothes ready (I needed my uniform today). So no sleeping in!

Marilyn got back in plenty of time for the two of us to make it over to the annual Blessing of the Festival, where the 2013 Court appeared. Here's a photo:

[clicking will go to the full size photo] 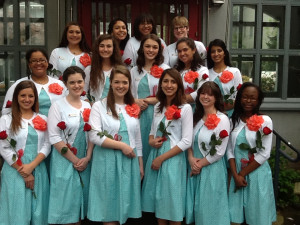 Todd (our President) did a pretty good job with his speech -- which Marilyn wrote (as always). He left out some stuff, unfortunately. But he wasn't bad. None of the speakers this year were outstanding, but the minister did a good job -- and kept his message surprisingly short (not taking advantage of the captive audience as is often true for this event). The weather was fine -- and there was no rain! Part of the event is outside, so that was nice.

After we came home from that we did manage to have a nap, before getting up in the evening to attend the show "Voices From Roosevelt," presented by the Intermediate Acting class -- sharing Roosevelt High School's history from 1906 to today. This was done through monologues, scenes, movement and songs.

[clicking will go to the full size photos] 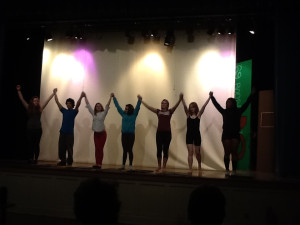 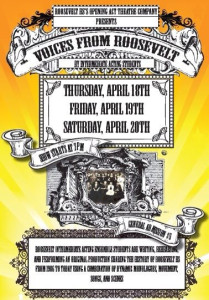 Marilyn and I had already assisted with this production, doing a questionnaire that was sent out. In fact, Marilyn was quoted more than one time during the production...

And the entire audience gave feedback at the end. They plan to rework the production and present it again, either in May or June. Hopefully sometime that we'll be able to attend again!

Afterwards we went for a late dinner at the Burrito House restaurant (which is happily open late on Saturday nights!). We had margaritas (they were weak, I'm sorry to report), bean dip and tacos (the food is always good), and a lot of pleasant talk!

Tonight Marilyn and I watched the movie "Seeking a Friend for the End of the World," with Steve Carell and Keira Knightley. It was an ODD film, frankly. The entire concept (three weeks until the end of the world) is difficult. But there were some nice moments. The use of music in the movie was good -- and it was especially nice to hear the song "This Guy's in Love with You" -- written by Burt Bacharach and Hal David and recorded by Herb Alpert.

The acting was good. Loved the dog (!!!) 'Sorry' -- and enjoyed several insightful moments. The younger/older love affair WORKED for me. I guess I'd say that I wouldn't highly recommend this film, but I wouldn't say not to give it a try, either. (smile)

You know, Steve Carell is a remarkably likable 'every man' type of guy. I pretty much dare you not to like his characters, as a matter of fact. He's very easy to relate to...

And that's my Saturday...