Explosions at the 2013 Boston Marathon

Like everyone, I have a lot of QUESTIONS about what happened at the 2013 Boston Marathon. But these questions do not include pointing accusing fingers at the local or national authorities and their response to this event, just to make myself clear. (I've seen some of that today, and frankly it makes me sick! Let's get angry and upset with the correct individuals or groups -- and those wouldn't be the people who are dealing with this mess, it would be those who caused it!)

Yes -- like all of you, I want to know WHO did this. I can't understand why that's not apparent. Even the most horrible terrorist groups are generally pretty quick to take credit for their actions. And this certainly is an act of terror -- what else could it be?

Why would anyone attack a group of runners and their supporters? Damn good question. I can't even imagine an answer, even an insane one -- aside from pure terror. I can't say this strikes at the American way of life, because RUNNING is universal -- and tons of the participants in the Boston Marathon come from around the world.

Here are some images borrowed from online (I didn't see sources listed, sorry, or I'd share.) 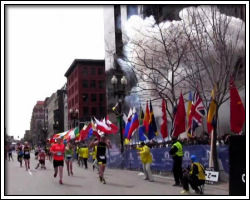 Someone caught one of the blasts on film 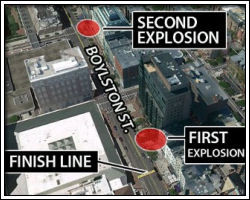 Here's a map that shows where the explosions took place 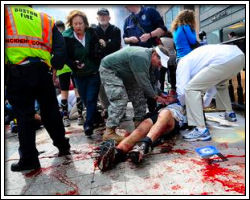 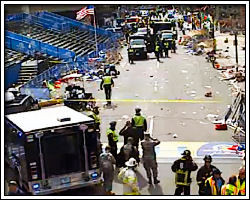 The media was quick to report things -- but not quick to remain calm and professional, nor to check their facts before reporting them. Yes, I understand that news reporters think they must compete with Social Media -- but you know what? I expect Twitter and Facebook to be about an emotional response (that's not necessarily accurate). I expect news programs -- and news reporters -- to be about giving us the NEWS. I'd like that to be as unemotional and accurate as is possible. I remember a time when those responsible for sharing the news really seemed to strive for integrity -- for providing a reliable source. If something wasn't confirmed, they didn't just say/write it anyway.

Finally, Marilyn and I are involved in special events -- it's what we do. The festival has a race that takes place in May. (Marilyn was home having lunch when Jeff called to discuss what should be said to reporters during interviews -- she is in charge of Communications, after all.) Jeff has already appeared on several local channels discussing this (from the point of view of a major special event AS well as from the point of view of a race producer). Marilyn and Jeff will especially be impacted (and my friend Rich) -- but it's going to impact the entire festival this year.

We were there for 9-11 -- so it's NOT new for us. Marilyn used to be talking to the FBI and local authorities and committees and so on over and over and over again -- and it hasn't stopped in the years since.

But this was a sports events -- and entertainment event! Why???

It should make 2013 an even more interesting year for us, anyway...

Praying for all the victims -- and for our entire nation.