I just turned on EWTN and they're showing the EASTER VIGIL MASS FROM ROME (His Holiness celebrating the Easter Vigil Mass, live from Rome). It's hard to believe it's Good Saturday, and Easter is tomorrow. It's very solemn as they walk quietly in the dark with only one candle against the darkness. Soon the candles of the Faithful will be slowly be lit. Right now the Holy Father's candle is being lit from the Pascal candle...

Marilyn felt really bad last night. She was sure she was getting sick -- and I was sure she was, too. At one point she wanted to pack up and just drive back to Portland. But she was feeling too lousy to do that... She took some medication and went up to bed and fell asleep pretty early.

I took my iPod and listened to some religious music. Then I shut that off my iPod and took my Kindle and began reading.

In Rome the Pascal candle's flame is being used to light all the candles. It's very moving to see the darkness pushed back by all those candles. And now the lights have gone up filling the room. All this is done in TOTAL SILENCE. 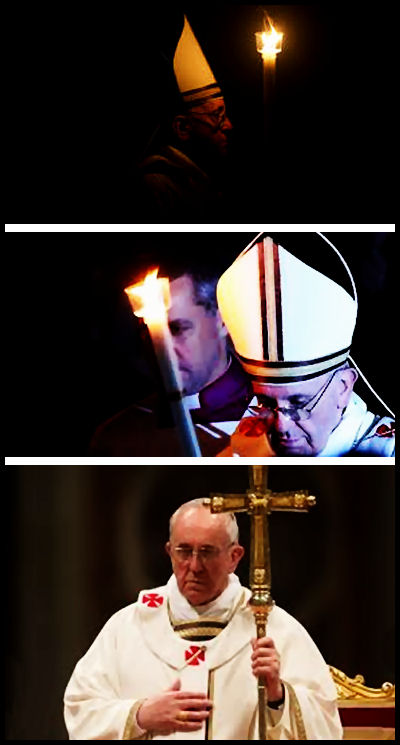 I've been reading "World War Z: An Oral History of the Zombie War" (written by Max Brooks, the son of Mel Brooks). I just read in "Entertainment Weekly" about the movie "World War Z" that Brad Pitt is making -- I'm sure all of you have heard about it... It's annoying to read that the movie will be deliberately changing some of the basic elements of the book. Actually, I should say MOST of the basic elements. Hahahahahaha. But who knows? Maybe the movie will still be good in it's own way -- even if it's not like the book.

In fact, right after I started reading the book I wondered HOW they could possibly turn it into a movie. It really doesn't lend itself to that. I mean, a mini-series or TV series, maybe. But not a movie... Oh well.

I read for ages before going to sleep last night. From the magazine, from some articles in The Oregonian Marilyn had kept for me to see, from another book (hard copy) and my Kindle...

This morning Marilyn was feeling better, so we didn't end up heading back to Portland. We made up a big pot of chili that we've been eating on today -- very tasty!

We did try to take a ride at one point. It was GORGEOUS outside -- warm with totally blue skies and no hints of a cloud. But the TRAFFIC was terrible! Awful. You could barely creep along. It's the end of Spring Break in Oregon and the first weekend of Spring Break for Washington -- and what used to be the focus of students off school has turned into something for adults, as well. TONS of people end up here in Seaside (Oregon) for Spring Break. It was amazing to see that many cars and people everywhere!

It might be annoying if you're trying to go anywhere, but it's good for the local economy. And it was actually interesting to see. But the second we were able to, we headed right back to the house again. So much for trying to walk on the beach today! (grin)

That was a goal, mind you. The idea of getting our toes in the sand. But what can you do?

The room is currently filled with the sound of chanting from the Vatican. Lovely sound...

It's nice to be here again. We were last here February 15, 16 and 17 -- so it's been more than a month. But we did get here in March. And we'll be here next weekend for Marilyn's birthday, too! I might have mentioned before that our goal would be to make it here at least once a month. It's especially difficult during the busy part of our work year. No, it's not a long drive. It takes around two hours from Portland to Seaside.

When Marilyn is really tired that can be a lot for her. The weekend before last we were actually packed up and ready to come here. We pulled away from the house with our small bags, food and other stuff -- plus the two cats in their crates -- only to turn around and go back to the Portland house. You see, when we have really busy weeks, all we really want to do on the weekend is sleep -- or lie around and relax. (That is IF we even get the weekend off from working, which we often do not.)

I think at one point yesterday we could have ended up doing the very same thing -- just turning around and going back to the house. As I said, it's not that long a drive. And it is a drive we love to make. We used to make it all the time before we had a beach house. It's pretty nice to have a destination, and not need to to turn around the same day and drive back again. But as I said, we've done that so many times! We just love coming to Seaside (and/or Cannon Beach). And the drive is part of that experience.

Okay, I'm on a different channel now and they're showing the Bush's Baked Beans commercial with the 'action figures.' I LOVE THIS!!! You know what??? I'd buy those! Hahahahahahahaha. Oh! Be sure to click the link to go and VIEW the YouTube of the commercial. I think it's so cool... 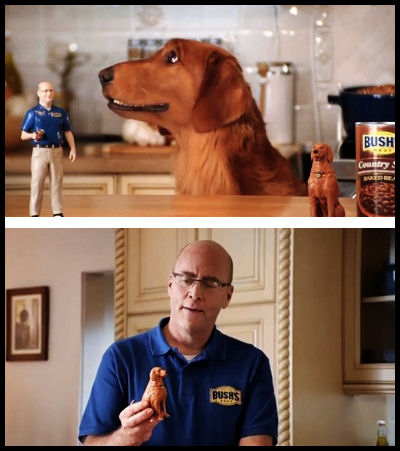 And that's it for today!