A New Pope, Francis I

I was over at my sister Sue's house, setting up a computer for her granddaughter Nicole this morning. Buddy (Candy's boyfriend) was a big help -- we used a folding table Sue gave me, plus a piece of board we had cut down to size, to create a computer station for Nicole. Frankly, it went so smoothly that I hardly know what to say. (It took more time to fix Candy's issues with Java than to get Nicole's computer up and running...)

Sue went to watch 'her show' (soap opera) -- and found that all eyes were turned to Rome, where white smoke from the Vatican was announcing a new Pope! (By the way, I immediately phoned Marilyn at work to let her know this was happening -- suspecting that she'd be so busy she'd have no way to know...)

We watched this coverage live for more than an hour, and I have to admit it was exciting. And I'd never have guessed at the choice (even though Argentine Cardinal Jorge Mario Bergoglio got quite a few votes the last time around). 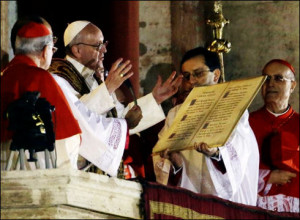 The new Pope Francis I is an interesting man. He's the first non-European Pope of the modern era, the first from Latin America, the first Jesuit (!!!) and the first to assume the name Francis (which I think is such a good choice). These are all good things...

But -- unfortunately -- he's very conservative. For example: As a cardinal, he clashed with the government of Argentine President Cristina Fernandez de Kirchner over his opposition to gay marriage and free distribution of contraceptives. Bergoglio has affirmed church teaching on homosexuality specifically that homosexual actions are immoral. He opposes same-sex marriage, and unsuccessfully opposed legislation introduced in 2010 to allow same-sex marriage in Argentina, calling it a "real and dire anthropological throwback." In a letter to the monasteries of Buenos Aires, he wrote: "Let's not be naive, we're not talking about a simple political battle; it is a destructive pretension against the plan of God. We are not talking about a mere bill, but rather a machination of the Father of Lies that seeks to confuse and deceive the children of God." He has also stated that adoption by same-sex couples is a "form of discrimination against children." He opposes the ordination of women (but I suspect that's no surprise to anyone).

On the other hand, there are many things to like about this man, including his intelligence, education and his humility. He's a passionate defender of the poor and disenfranchised. The man lived in an apartment (!!!) as a Cardinal and even cooked for himself! Last September (2012), he scolded priests in Buenos Aires who refused to baptize the children of unwed mothers.

He broke with tradition -- something which will probably make many in the Vatican unhappy, by the way -- when he started out today by asking viewers to pray for him.

I found myself very excited during the wait for the announcement. And tears were in my eyes as the Pope was presented to the world. It feels BAD to me during those short times when we don't have a Pope, so I was glad to see this position again filled.

I guess we'll all have to wait and see what this man does, now that he's assumed one of the most powerful positions in the world.

I just can't ever get past certain issues with the Catholic church. I'm never going to think of homosexuality as wrong. Or as adoption by homosexual couples as wrong. I think the clergy should be allowed to marry. I think women should be ordained (or at least elevated to a greater position of respect, considering how poorly females are treated in the Church -- and this is especially true of women religious, poor sisters/nuns!).

But I'm convinced that the Church will never change on those issues in my lifetime.

Oh. And I'm personally opposed to abortion. But I don't think using contraceptives is abortion! To me the avoidance of pregnancy is entirely different than aborting a fetus.

I don't normally spell this all out like this, because I'm anxious not to upset or offend others who have differing views. My religious position is a complicated one, for obvious reasons! You can't be a 'good' Catholic and go against these basic tenets of the faith -- but my heart tells me that I'd be involved in a terrible sin if I didn't follow my heart (regardless of the teachings of the Church).

I always turn back to the words of Jesus Christ -- or the lack of words, in some cases. Clearly we are meant to struggle with this, or things would have been spelled out more clearly in the Bible. I can't bring myself to blindly follow every word of the Bible (especially the Old Testament) when there are obvious statements that make no sense. (Don't get me started on this subject.) I'm not suggesting that I am the one to determine what is significant in the Bible for the world -- or that I have special insights that others don't have. I understand that I'm not supposed to decide what to accept and what to reject. Regardless, that's exactly what I've done my entire life -- and will continue to do.

Religion is such a personal thing. I don't like to tell others what to believe. I've never been that comfortable with the concept of 'witnessing' for my faith, because it smacks of me trying to force others to change their minds about what works for them. Look, if I do things that seem good or right to you -- and you want to know why (and what I believe) -- then I'm fine sharing. And there's nothing wrong with me telling you what I believe -- as long as I'm open to hearing about what YOU believe, in turn. Give and take. Live and let live. Prayer is an important part of my life -- but that doesn't mean it has to be any part of your life...

I do pray that the new Pope will do amazing things for the world. And that he'll work with other leaders to bring peace into the world, whenever possible. I'm trying not to make judgements about him at this point, because we need to wait and see...

Anyway, it's a very hard life -- and I wouldn't wish that schedule on anyone! It's little wonder how it ages these men and how their health fails under the tremendous burden. I pray that Pope Francis I will be strong as he serves the Church and the people of the Church -- and the entire world.

And this is about as serious as I get! (smile) Yesterday I talked about J.R. Ewing -- today about Pope Francis. You never know what tomorrow might bring. Hahahahahaha.